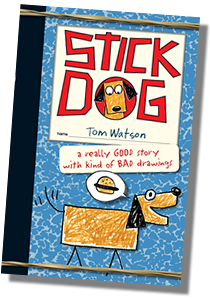 When Stick Dog gets a whiff of hamburgers grilling at Picasso Park, he knows he has to get one. Along with his stray dog friends – A Dalmatian named Stripes, a Dachshund named Karen, a mutt named Mutt and a Poodle named Poo-Poo – Stick Dog embarks on an epic quest to snatch those fantastic-smelling burgers.

It’s not an easy task. On the way, Poo-Poo gets attacked by a squirrel, Karen gets lost and Stripes becomes convinced that the family at the park is really a band of super-warrior humans.

What they need is a plan – but Stick Dog’s friends are, umm, not very good at coming up with realistic burger-snatching strategies.

Using teamwork, patience and skill, the question is this: Will Stick Dog guide them safely to a delicious dinner? 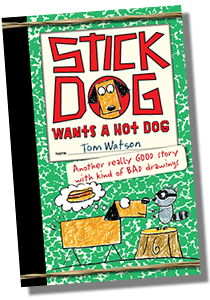 In this sequel to the first adventure, Stick Dog and his pals hear a strange noise. They discover it’s a bell attached to a hot dog cart. And when they sniff the aromas emanating from that cart, the hunt for hot dogs is on.

One problem though: This time they have some competition. A team of raccoons led by their ringleader, Phyllis, is on the prowl for the hot dogs too.

Can Stick Dog lead his team to the prize first? It’s going to take all his skill, fortitude and cunning to treat his friends to a fabulous frankfurter feast.

But he’ll have to do something else first – rescue Karen from the clutches of a large, strange-acting human. 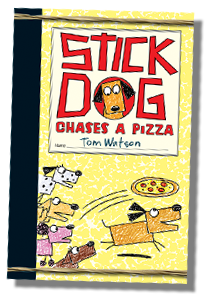 Is it a flying saucer?  Is it a Frisbee?  Or is it the best thing they've ever tasted?

Stick Dog and his crazy canine crew have discovered a newfangled flavor – and it's even more delicious than hamburgers and hot dogs. It's pizza! And they won't be satisfied until they get some slices of their own.

But it won't be easy. There's a kitten to rescue, a plan to make, and the messiest—and most dangerous—game of catch they've ever played. Pizza is on the menu, but only if their mission succeeds. 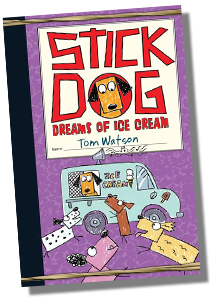 Stick Dog and his pals are back, but this time the temperature is rising and they're all feeling the heat. They need cold, cold ice cream on this hot, hot day.

It will take all of Stick Dog's smarts to guide his friends to a scrumptious ice cream feast. They'll battle a water-attacking machine, discover rainbow puddles, and chase the strangest, loudest truck they've ever seen. But there's a looming threat to their mission – Stick Dog gets spotted by a human. And the police are on his tail.

If he's captured, Stick Dog may never see his friends again. If he escapes, it's ice cream for everyone. 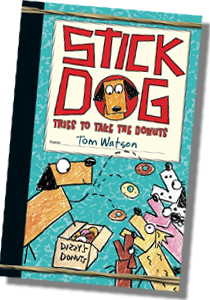 The dogs are hungry.

It's time to take the donuts.

Stick Dog and his team of strays are off on another outrageous canine caper. To snatch some breakfast treats for his hungry pals, Stick Dog will need to stop a moving truck, outfox a man on a telephone pole, and calm down a very caffeinated Karen. But that's not all. He'll also need to manage the greatest confrontation in history when his good friend Poo-Poo comes face-to-face with the ultimate enemy — a squirrel.

With Stick Dog's smarts, daring, loyalty — and patience — he just might lead his buddies to the best breakfast ever. 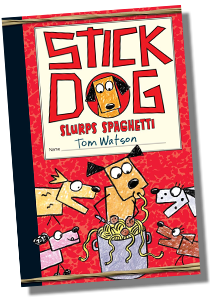 It's Slippery! It's Slurpable! It's Spaghetti!

Stick Dog and his gang of hungry hounds want to play tug-of-war. Their search for rope leads to something even better—spaghetti! Once they get a taste, they must get some more.

It will be their most difficult mission ever—and will demand all of Stick Dog’s problem-solving skills. They’ll need to scale the tallest mountain in the suburbs and sneak into a restaurant filled with people.

Dangerous humans—a strange-talking girl, a huge chef, and a penguin-man—lurk around every corner. But there’s more than danger in the air. Stick Dog has caught the scent of something even more scrumptious than spaghetti. And he’ll risk everything to find out what it is. 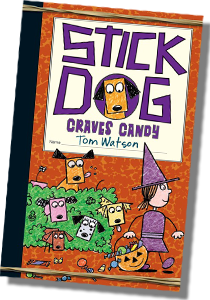 Witches are on the prowl.

And so is Stick Dog.

As darkness falls in Stick Dog's neighborhood, strange little humans emerge into the night. There are witches, astronauts and ghosts. The dogs want to know where they're going - and what they're doing.

While his friends Stripes, Mutt, Karen and Poo-Poo freak out, Stick Dog uses his courage and smarts to discover the taste of something sweet - candy!  But just a taste will never satisfy this band of hungry hounds. They need more candy - and they need it now.

To reach the ultimate sweet reward, Stick Dog will need to stalk two witches, outfox an old woman and escape from a locked enclosure. The night is dark and full of strange creatures and sugary treats.  And Stick Dog is ready to go. 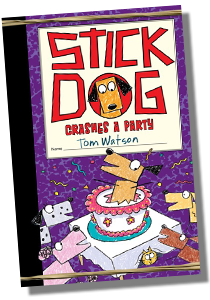 Stick Dog and his hungry pals have found plenty of tasty treats at Picasso Park before. But it's never looked like it does on this dark, dark night. Strings of white lights, colorful fireworks, and an endless buffet of amazing food have transformed the park into a food-snatching wonderland. There's a party going on, and Stick Dog, Mutt, Poo-Poo, Stripes and Karen are ready to crash it. But how will they do it?

It will take a top-notch strategy, some good luck, and a little help from two charming cats to complete their mission. It's another smart, hilarious romp for Stick Dog and his team of strays. 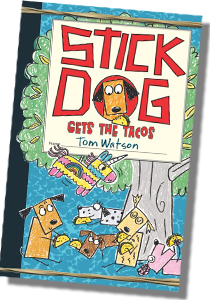 What's in the Tree?! It's an emergency! No. It's an opportunity!

When Karen sprints into Stick Dog’s pipe and declares an emergency, Stick Dog springs into action. After racing through the woods with his squad of strays, Stick Dog discovers there’s no crisis at all. But there is a great opportunity to feed his hungry friends.

As a family of humans plans to feast on tacos, tortilla chips, and guacamole, Stick Dog makes plans of his own. To feed Mutt, Karen, Poo-Poo, and Stripes, he’ll need all his smarts and problem-solving skills.

While his hungry, drooling, goofy friends prepare to chow down, something nags Stick Dog at the edge of his mind. What is that thing swinging in a tree? And how can he get it? If this funny, madcap, daring quest succeeds, it’s taco time for these crazy canines! 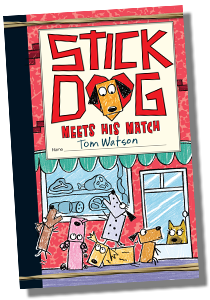 Coffee is served! Meat's on the menu! And love is in the air?

When Karen drinks too much coffee, Stick Dog's day spins out of control. As he and his friends work to rescue a hyper Karen from a really deep hole, Poo-Poo catches a scent. It’s meat! Marvelous meat! And it’s in a big truck. But there’s more than meat in that truck. There’s also a new dog. And when Stick Dog sees her, his heart feels funny.

Stick Dog needs to rescue Karen and track down that meat truck. It will take all Stick Dog’s smarts, problem-solving skills, and patience to save his friend and feed his gang. But he just might need some help this time – some female help.

It’s another tail-wagging, food-craving adventure for these hilarious hungry hounds. Throw in some puppy love (!) and this Stick Dog adventure is unlike any ever before. 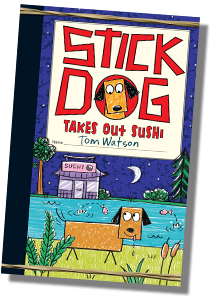 When Stick Dog and his crew unknowingly discover chopsticks, their taste buds lead them to a lakeside sushi restaurant. They see the sushi. They smell the sushi. But how are they going to get the sushi?

Several things stand in Stick Dog’s way. They include a squirrel eating a barbecue potato chip, a runaway canoe, and a little female human. Stick Dog must navigate around each of these obstacles if he’s ever going to get some sushi for his drooling friends.

It’s another wacky food-snatching mission. If Stick Dog fails, Mutt, Karen, Stripes, and Poo-Poo will go to bed with empty stomachs. If he succeeds, it’s sushi for everyone! 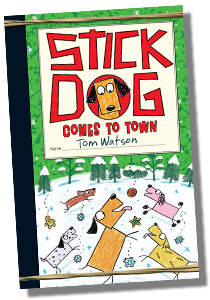 Weird things are happening in Stick Dog’s snow-covered neighborhood. Strangely shaped pinecones hang from trees. Humans sing merry songs all over town. And an odd man is making a list and checking it twice.

Mutt, Karen, Stripes, and Poo-Poo have tons of questions. And for the first time, Stick Dog doesn’t have answers. But their good friend Lucy does. And when the dogs learn all about Santa Claus, their hilarious quest begins.

They need Santa to find Stick Dog's pipe. It won't be easy. They must create and hang stockings, cut down and decorate a tree – and so much more. The biggest problem? Tomorrow is Christmas Eve.

Will these holiday hounds complete their mission? Will Santa find their home in the woods? If he doesn't, it could be a long, cold winter. But if he does, Stick Dog and his pals can celebrate Christmas for the first time ever!

To buy these books online, click on the cover(s).

Did you know that the Stick Dog series is also available in the UK? The book covers look a little different than the covers in the U.S. Isn't that cool? If you want to buy the British version of the books, click on the covers below and you'll be taken to their listings on Amazon UK. 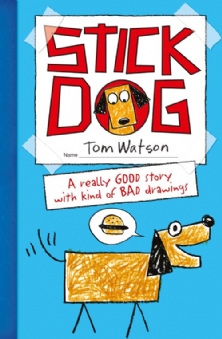 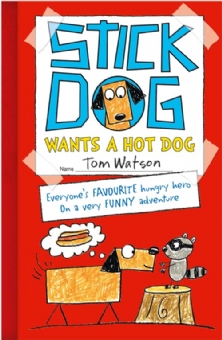 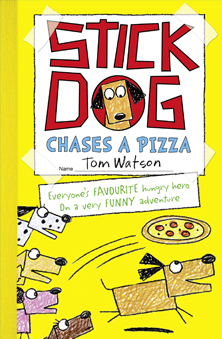 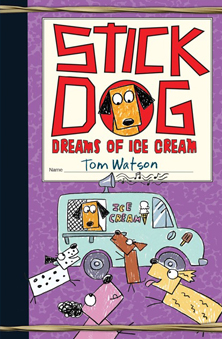 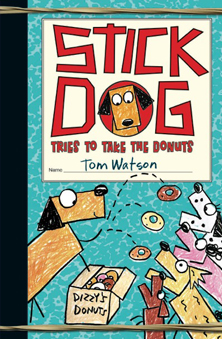 You may have read about these rhyming picture books on the ‘Author’ page. Tom created them for his kids when they were younger. Together, they’ve been downloaded as electronic books more than two million times at Amazon, Apple’s iBooks store, Barnes & Noble and other E-book outlets.

You can download any or all of these for free right from this website. You’ll get a PDF file that you can open and read on your computer, tablet or phone. Or you can print it out and read it that way.

Aimed at slightly younger readers than the Stick Dog books, these stories still reflect Tom’s love of language, quirky humor and old-fashioned storytelling. Filled with colorful paper-cut illustrations, Tom is happy to share these stories with anyone who wants to read them.

His wife’s favorite of these books is Garbage! Monster! Burp! Tom’s favorite is Vampire Bass.

You should show your parents this page and ask them if it’s okay for you to download these stories for free. 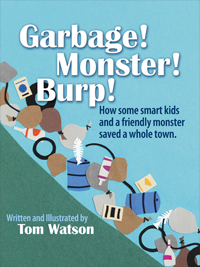 A monster at the bottom of a hill eats all the garbage generated by the town on top of the hill. This provides two important benefits: The monster is happy with plenty to eat and the town stays nice and clean. Unfortunately, as the town grows, so does the amount of garbage the monster must consume. He gets bigger - and he starts burping. This is, as you can probably guess, a bit unsightly and stinky. In the end, the kids figure out how to solve the problem - despite the nasty mayor's doubts and objections. 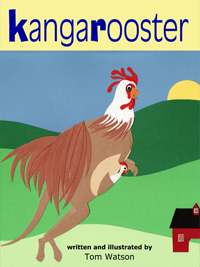 A father and his daughter, Lizzy, work on a farm in Kalamazoo. The father instills a serious work ethic in his daughter - and in the animals that live on the farm. One day, Lizzy discovers a kangaroo. Her father agrees that it can live on the farm if Lizzy can find the animal a role. Lizzy succeeds, but then she discovers even stranger animals - Kangaroosters. What job will she find for them? 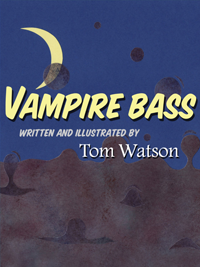 When a new power plant pollutes a nearby lake, there are strange and unusual consequences. The friendly fish begin to mutate - and then seek revenge against the power plant. Even though this story has ‘vampire’ in the title, it’s not scary. 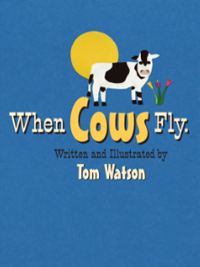 Written in a rhyming, limerick style, the story revolves around a boy in the woods, his pet cows and a massive pile of garbage that is accumulating nearby. Jacob takes matters into his own hands. He attaches wings to his cows and they go to work. What happens next is both funny and (a little bit ... ) gross.