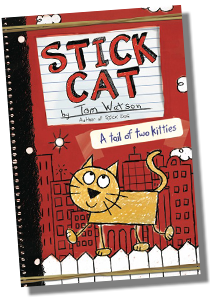 Stick Cat lives in the big city. His best friend is named Edith. Every day when their human roommates leave, Stick Cat and Edith get together through a secret hole between their apartments. They do all the usual things two cats would do – look for crumbs on the kitchen counter, dream of bird hunting and search for small, shiny treasures.

In the first book, however, their day is anything but ordinary.

A violent crash sets off a chain reaction of noises and events.

Soon they discover that those events have led to a dangerous predicament for an old, kind man in the building across the alley.

It’s Stick Cat’s job to attempt a rescue. To do so, he’ll need to utilize all his smarts – and manage his way around Edith’s charming, amusing – and peculiar – ways. 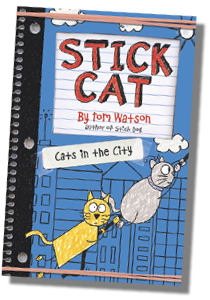 Stick Cat is going somewhere he’s never been before—his best friend Edith’s apartment. It’s got everything: donut crumbs in the sink, a fire escape, and a window with a great view of the big city.

While admiring the view, Stick Cat sees trouble. Hazel, the bagel maker, is in serious danger in the building across the alley. Stick Cat will use his smarts—and Edith’s appetite—to devise a rescue plan.

But can Hazel hang on long enough for this dynamic duo to save her? 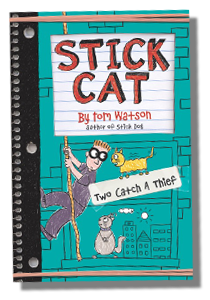 Much to Edith’s delight, she and Stick Cat are enjoying a lazy day at his apartment. But not for long. Soon, strange and threatening sounds come from the ceiling. What could it be? An elephant? Santa?

Stick Cat suspects the man is up to no good, while Edith only hopes the man has snacks. When treasures are stolen from their homes, Stick Cat must come up with a plan to stop the burglar. There’s a thief on the loose. He is big, determined, and sneaky. Will Stick Cat convince a hungry Edith to help him catch the thief? 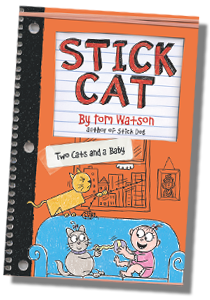 Now that their owners are married, Stick Cat and his best friend, Edith, live in the same apartment. There’s someone else in the family too – Millie, the new gurgling, babbling baby.

When Edith declares that Millie’s sounds are actually flattering compliments about Edith, her devotion to the new baby is complete. There’s harmony in the home – until Grandma Cobb arrives to babysit. That’s when things quickly spin out of control.

A mishap leaves Grandma trapped inside the bathroom – and locked away from Millie. Stick Cat needs to rescue Grandma. But he also needs to help Edith in her new role as babysitter-in-chief. It just might be Stick Cat’s toughest mission ever. 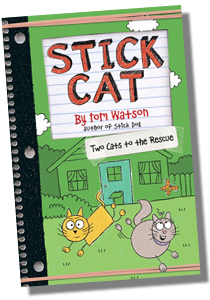 When little Millie wanders off, Stick Cat needs to get her back. It's a rescue mission with too many obstacles to count. There's a runaway butterfly, a pole-vaulting adventure, and a growling beast in the woods. Yikes. And, of course, there's Edith.

Will Stick Cat be able to navigate around her wacky plans, fragile ego and peculiar ways? Just when he's doubting his chances, five familiar dogs burst onto the scene to help this rescue mission succeed.

To buy these books online, click on the covers.